Beautiful, adventurous and easy to get around puts New Zealand on most peoples must-visit list. So we’ve pulled together this guide to New Zealand overland trips to help you make the most your visit. We’ve also included the best NZ adventure sports you should try. 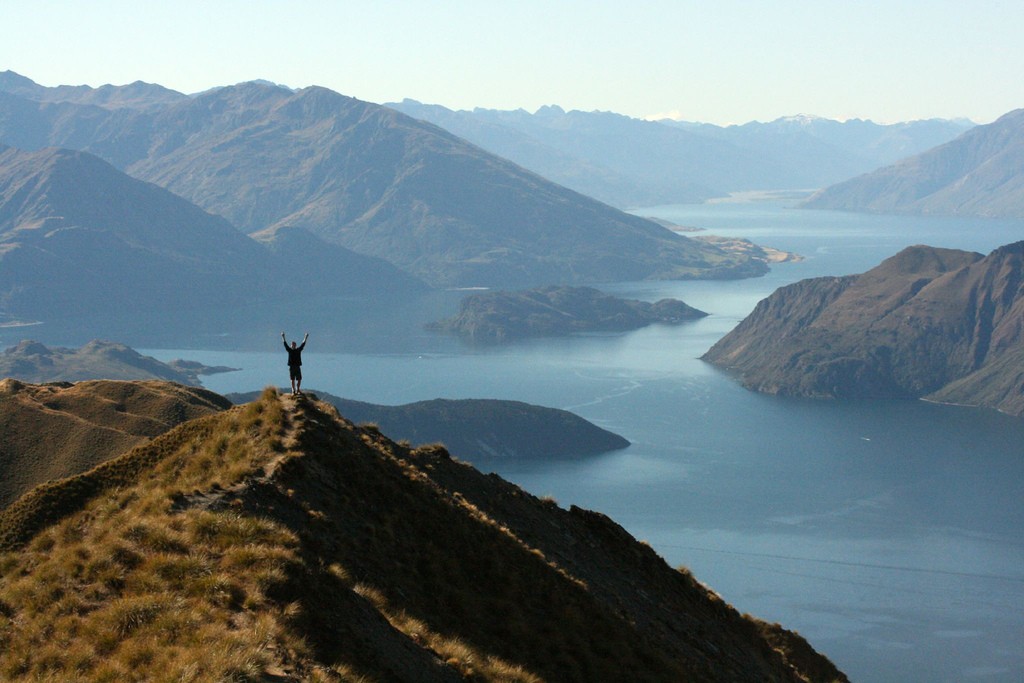 Everyone I’ve met that who’s been to New Zealand has returned with rave reviews – myself included. But what makes it such a great place for travel and adventures?

It helps that the mountains, beaches, forests, glaciers, volcanoes and cities are stunningly beautiful. Due to a low population density and a strong environmental laws, these natural resources are mostly unspoilt and many are still wild.

A big attraction is that New Zealand has embraced adventure travel like no other nation. Not only can you get involved with anything from skydiving to scuba diving and surfing to skiing, but the best NZ adventure sports are activities that have been created by Kiwis.

New Zealand is also a very safe country to visit as it has a much lower rate of serious crime than most other countries. In fact is rates as the second safest of 162 countries ranked by the 2017 Global Peace Index.

Finally, New Zealand overland trips are easy. English is the main language and locals are almost always friendly. The public transport connections are reliable and regular. Plus it is very easy to drive around, with good well sign posted roads and relatively few places you can get lost.

Let’s get physical: New Zealand is two main landmasses, North and South Island. They are the visible parts of a submerged continent separated millions of years ago from the supercontinent of Gondwana.

The country’s explosive beginnings have a lot to do with the sports that it’s pioneered. Kiwis have embraced the array of natural challenges on their doorstep to create the best NZ adventure sports.

Eruptions and glaciation carved the landscape of the Southern Alps. Leaving behind incredible lakes and valleys such as Tekapo, Te Anau, Wakatipu and Pūkaki.

Supervolcanoes created bowl-like calderas – some of which are now lakes. In fact Auckland sits on a volcanic field that up to 600 years ago was still bubbling away… But this has created an lovely undulating city with scenic volcanic islands off-shore.

All over New Zealand, this volcanic uplift left few flat areas. So expect the going to be steep and the views spectacular. This country is alive, and packed with opportunities for adventure on New Zealand overland trips!

The climate’s good too. Temperatures are generally mild so you can get active without overheating. That said, when you look at its extremities, there’s a huge variation: In the far north it’s sub-tropical in summer, whereas in the south you’ll find Alpine conditions in the winter.

Winter is June through to August and you’ll need good outdoor clothing particularly if you head south. Temperatures drop as low as -10°C in the south and even lower in the mountains, but up north is rarely drops much below 10°C. 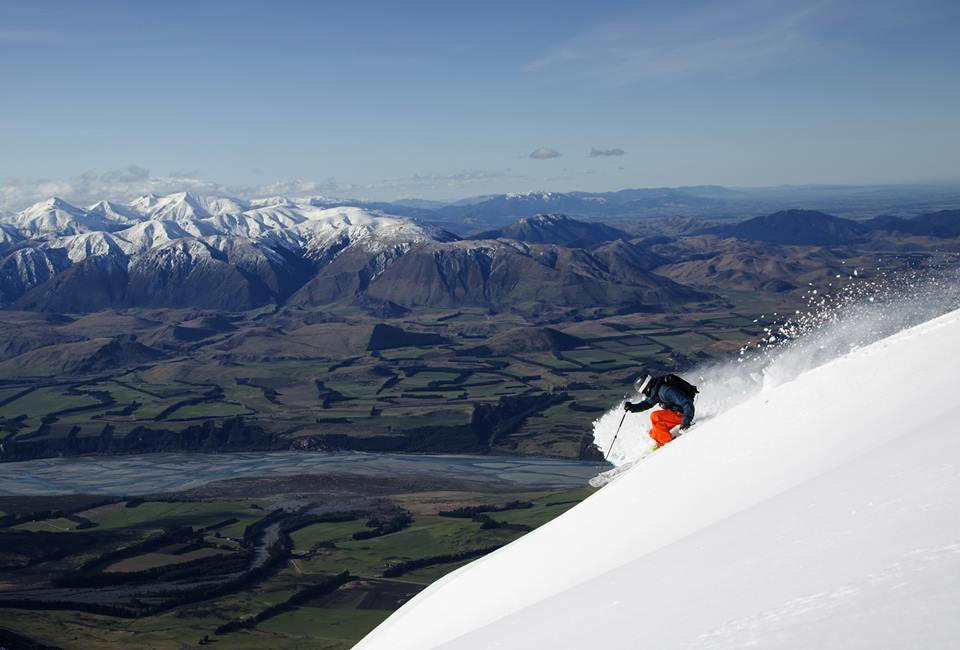 OK so it rains quite a bit, so on New Zealand overland trips be prepared with waterproofs year round. But there’s plenty of sunny days to balance this out – the rain is often hard but short lived so get under cover then get back out once it stops.

Of course no guide to New Zealand overland trips would be complete without talking about how you are going to get around. There are really four choices, join a tour, use public transport, drive yourself or hitchhike.

There are plenty of tour bus options catering for different styles of trips. There are buses suited to party hungry youngsters, tours focussed on adventure sports and those designed for older guests who like a little luxury. The choice is yours!

The local transport options are very good to particularly from Auckland, Christchurch and Wellington. Trains, buses, planes and ferries all run regularly and are very reliable. Some of the tour buses offer hop-on hop-off services that can be used like public transport, but stop for all the best NZ adventure sports. 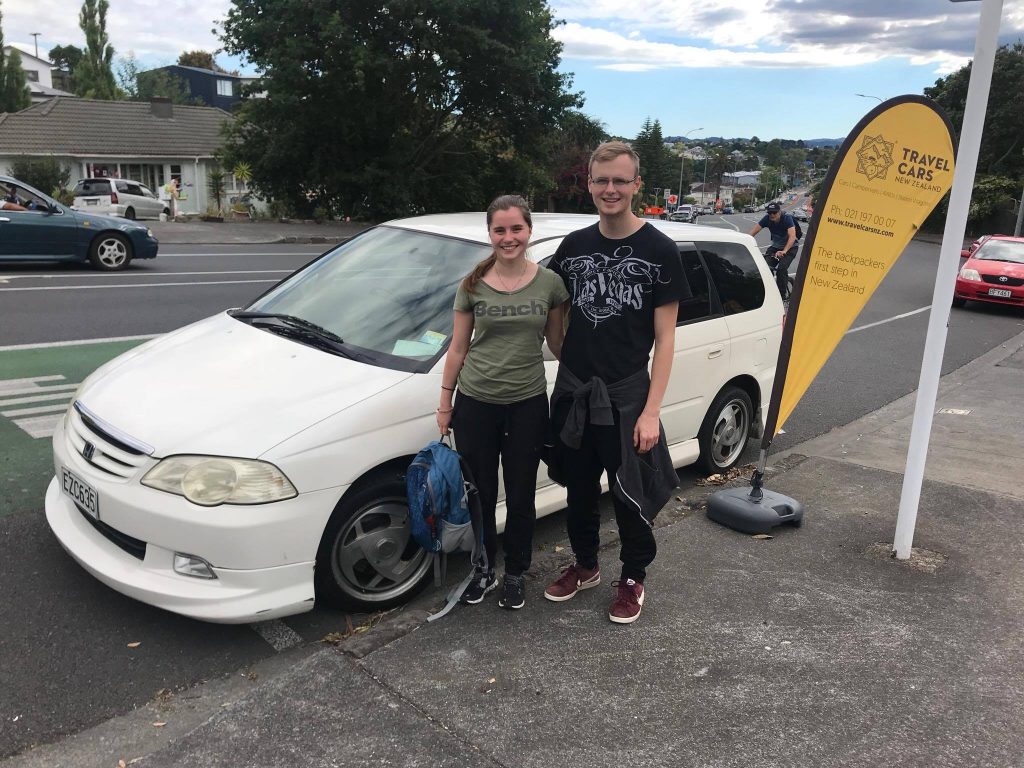 Driving yourself is one of the best options. It requires a little more planning and up front cost, but the freedom to go where you want and stop at whatever takes your fancy is unparalleled.

I had an incredible experience travelling around NZ in a campervan. As you always have your bed with you, you can stop and sleep where you want, saving money and adding freedom. It is pretty easy to buy and sell campervans in Auckland at the start and end of New Zealand overland trips.

New Zealand is one of the few countries that is considered safe to hitchhike. Of course you should always stay safe by hitching with someone, refusing rides if they seem weird, and stopping before it is dark.

When I spent three months overlanding in New Zealand I did a combination of all of the above. You don’t have to decide before you go, personally, I enjoyed winging it and deciding how I’d travel as I went. 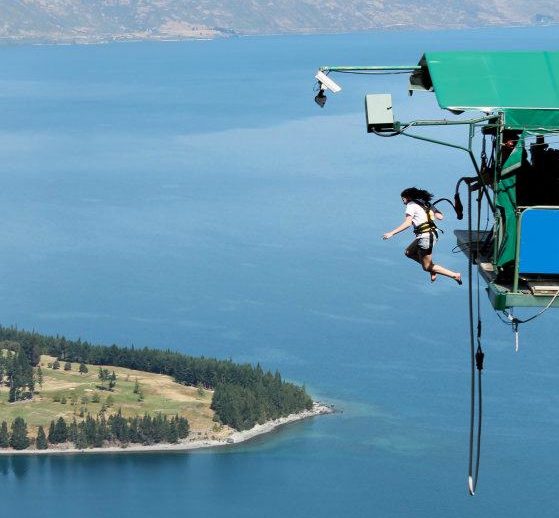 There are so many adventures to be had during New Zealand overlanding trips that we can’t include a detailed write up about them all here. So this is just a brief summary of the best NZ adventure sports that were created by Kiwis:

Devised by AJ Hackett and Henry van Asch, who were inspired by the people of Vanuatu, bungy has gone on to be a world phenomena – and in some ways an advert for New Zealand. The highest one in NZ is from a highwire pod at 134m above the Nevis River near Queenstown.

Get in a big ball and roll downhill. Not much more to it than that. Andrew Akers and Dwane van der Sluis invented this in 1994 and first tested their prototype in Kawerau. The first permenant site was set up in Rotorua, and after this it was ‘rolled out’ around the world.

Loose the propellor, instead use a jet of high-pressure water to push your little craft across the water. Created to help skip across the shallow rivers and through the canyons of NZ. Great to try this near Queenstown or Taupo. 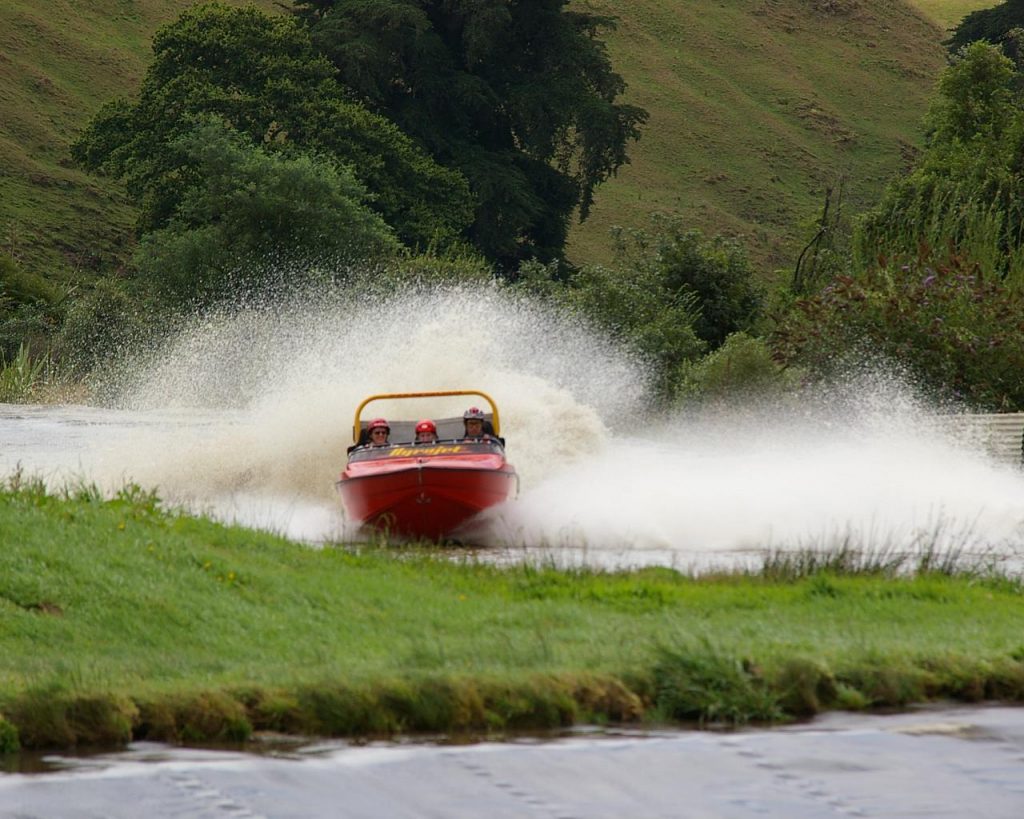 Similar to the optimistically named ‘Death Slide’ in the UK in typical Kiwi style they strap you in head first for more of a thrill. They also make them extra long, and extra fast making it one of the best NZ adventure sports. Loadsa fun!

New Zealand is a prime destination for trekking, hiking, walking and snowshoeing. The mountains are also criss-crossed with mountain biking trails, and cycling is a popular method for exploring the country as it’s roads are fairly quiet. 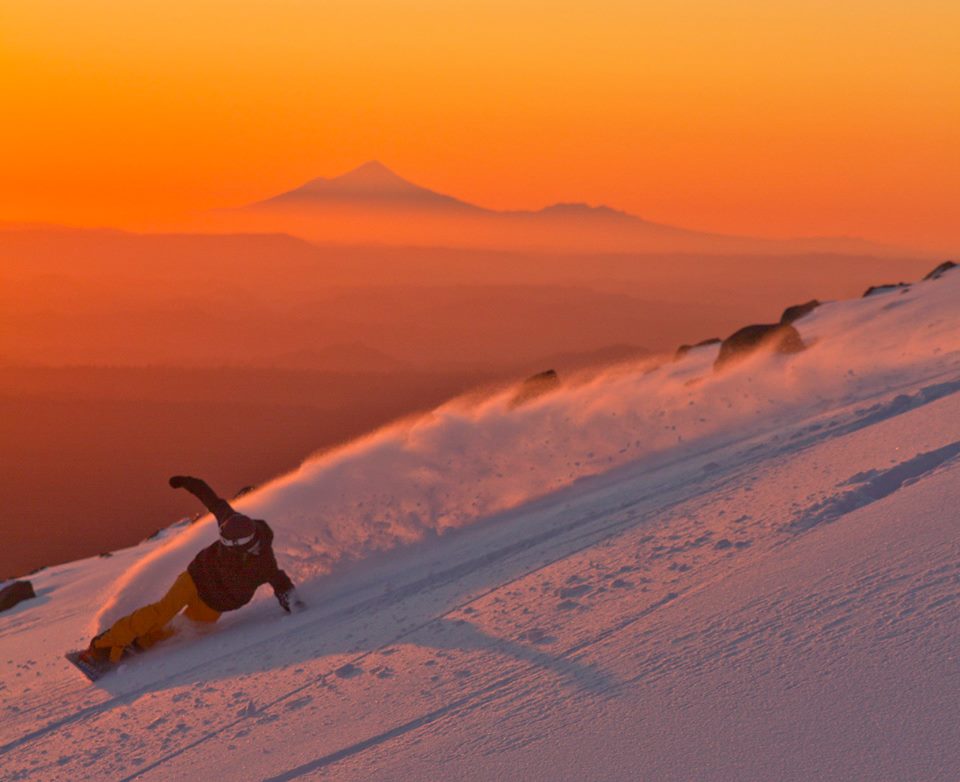 During the winter the peaks of New Zealand become a playground for skiers and snowboarders, with New Zealand having the best ski resorts in the Southern Hemisphere. There are also heli-ski options opening up a world of freeride fun.

Around the coasts there is plenty of surf to be found on New Zealands beautiful beaches. You can also kiteboard, windsurf, wakeboard, sail and sea kayak its stunning coastline.

Beneath the waves there is also plenty to see for scuba divers, with both wrecks and reefs to explore – including the best sub tropical diving worldwide according to Diver Magazine (UK). You can also cage-dive with great white sharks, or share the water with dolphins and seals in Kaikoura.

The wild rivers offer some of the best white water rafting and kayaking in the world, you can even go black water rafting in caves. And compared to the population there are more places to tandem skydive in New Zealand than anywhere else. 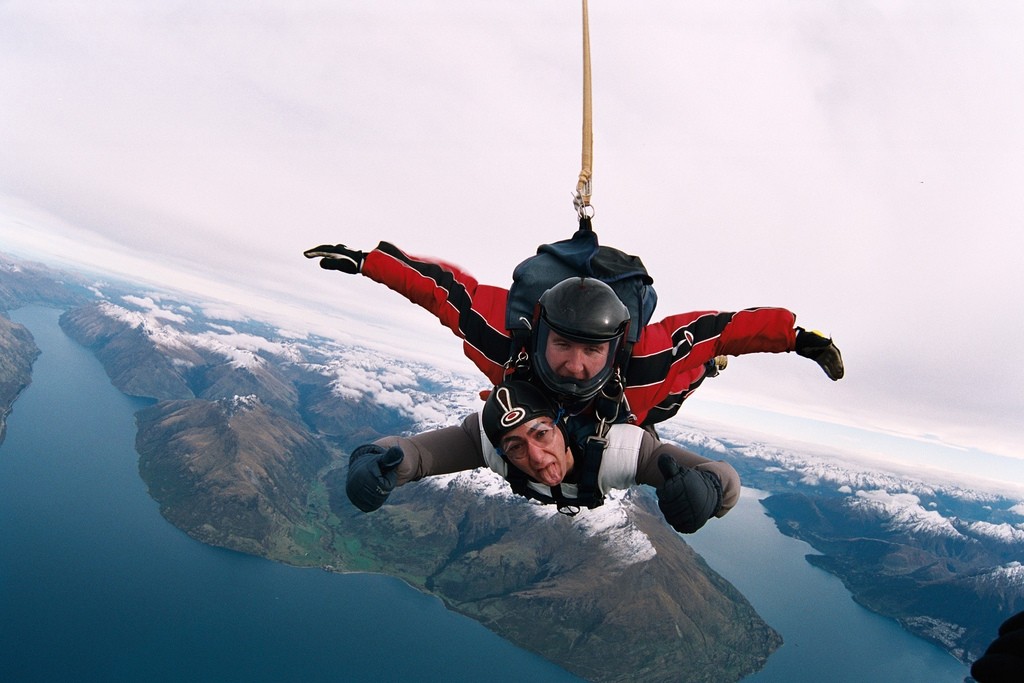 There’s a quality of life that we in the busier, more commercialised parts of the world envy, which makes New Zealand overland trips so special. Add the vast, beautiful and testing wilderness and the best NZ adventure sports and in our opinion you have the best travel destination worldwide.

If you fancy a trip down south then be sure to check out our New Zealand discounts as you could save a fortune. The Camel Trophy was an overlanding extravaganza of adventure and exploration. It was launched in 1980 with a race along the trans-Amazonian highway. It was the... Whether it is the current travel restrictions or a lack of holiday funds, a home based holiday – or staycation as it's known – is always an option. But can you... How to not get bored at the airport: Top 17 tips to pass time in an airport

We've all been delayed. Whether it is a strike, snow at destination, an ash cloud or just plain old 'flight delayed'. You might just have a long layover or be at the...