Sailing the Caribbean Islands: 11 best ports in the West Indies

Sailing the Caribbean Islands is the perfect tonic to grey, cold and wet winter days. But with so many white sandy beaches and blue-turquoise waters to explore where should you go? Well the 11 best ports in the West Indies are a good place to start.

Caribbean sailing: What to expect

When you think of sailing the Caribbean islands, a flat tropical paradise with white sand and blue water probably comes to mind. However, this is far from the truth.

Though some of the more northern Caribbean islands are relatively flat, much of the region is volcanic and mountainous. This makes for some stunning scenery. Of course you’ll still find those idyllic Caribbean beach scenes.

Autumn and winter are the best time to sail the Caribbean. The East-North/East trade winds are most reliable from November through April. Wind speed is usually between 12 and 22 knots, with minimal storm squalls.

Sailing the Caribbean Islands is relatively easy. This is thanks, in part, to the relative proximity of the islands to each other. Most crossings are less than 20 nautical miles. Although coast guard service is lacking (at best) so always sail prepared.

The Caribbean is a collection of approximately 7000 islands, cays and reefs. Which is commonly referred to as the West Indies.

The governmental and national jurisdiction of the Caribbean is complex. Many nations are independent, while others function as a sort of overseas collectivity of their respective motherlands.

There is a great deal of ethnic diversity among the islands. Carib indigenous, African, French, Dutch, Portuguese, Indian and British – to name a few.

11 best ports in the West Indies

I spent a great deal of time living in the region and sailing the Caribbean Islands. So here are my top 11 ports of visit.

Guadeloupe is a French overseas territory located in the southern Caribbean. With a population of nearly 400,000 and spanning an area of 1,600 square kilometres, this island seems to be busy compared to its neighbours.

Point-a-Pitre is not the island’s capital but it is the busiest hub due to its central location. One of the neatest features of this port is the ability to sail through a river system that dissects the two main landmasses that form Guadeloupe. 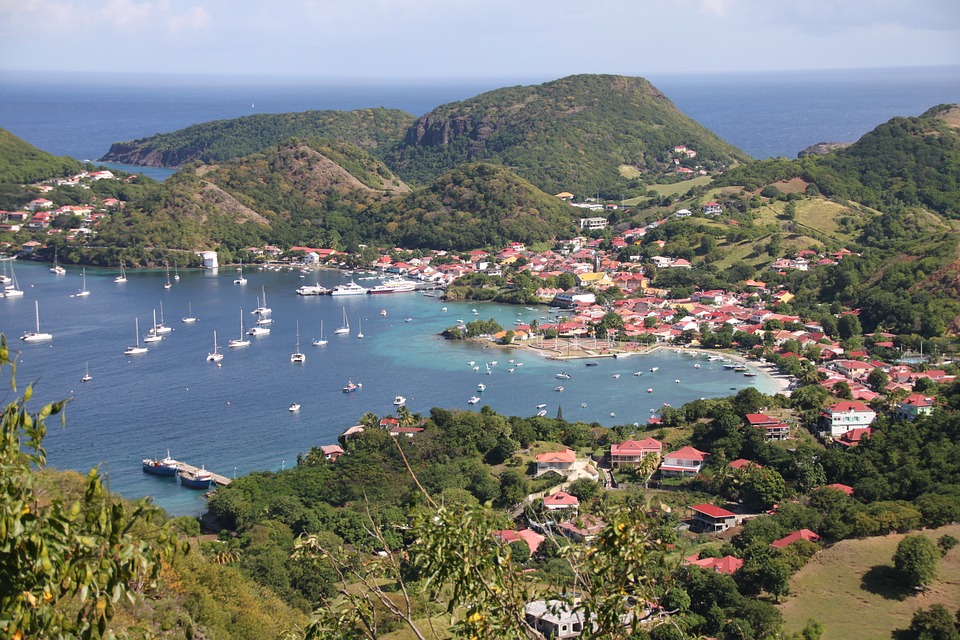 If your boat’s draft is small enough, you can pass through this river channel. This avoids many hours sailing around the lee and south coasts to reach one of the best ports in the West Indies.

Once ashore, there are many quaint French cafes and pubs that are sure to keep you entertained after sunset. Sail or motor three miles east to visit the beautiful island of Gosier that sits just off the coast.

This port is one of the major bustling hubs and more accessible islands of the Caribbean region. It is a great place to stock up on supplies and to be sure that your boat is in tiptop shape.

One of the greatest things about sailing holidays in Antigua is the abundance of well-protected anchorages. If a storm is threatening, seek refuge here.

Head over to the local flat island of Barbuda for perfect beaches and unreal kiteboarding and some of the best windsurfing in the Caribbean. Be on your game navigating around this region, as there are hundreds of wrecks due to the plethora of reefs.

In 1995, this tiny island’s volcano, Soufriere Hills, began a series of violent eruptions. Disturbance would continue until 2010. During this time, the entire southern portion of the island was destroyed by lava and dust. Including the former capital city of Plymouth.

Once a bustling hub of British expats and indigenous natives, the city was totally abandoned. The southern end of the island is now deemed as an exclusion zone and entrance is controlled.

With a local guide, it is possible to visit Plymouth and walk through the houses on the fringe of the town that are still standing. Dishes, clothes and vehicles rest under inches of volcanic ash. The vibe is strangely eerie.

Most people left all of their belongings behind, expecting to return. But never did. Leaving one of the best ports in the West Indies as a ghost town. Instead harbour up at Little Bay.

Sitting far out in the Western Caribbean, the Caymans are a long reach for anyone sailing the Caribbean Islands. Though relatively flat and lacking in geographic variation, the beaches are stunning and sandy with many fringing reefs to break the surf.

Kitesurfing holidays are popular here and the Cayman Islands have some of the best Caribbean dive sites. Some cruise ships call here on their way to the Mexican Caribbean. Be sure to visit Stingray City to hold and feed live stingrays.

The Turks and Caicos islands offer the Idyllic white sandy beaches most people associate with Sailing the Caribbean Islands. Government Wharf is the official entry point for Grand Turk and is near T&C’s capital Cockburn Town.

There are beautiful beaches, a lively town and a lot of cruise ship visits. It is one of the best ports in the West Indies for shopping and entertainment. Check out this guide to the Turks and Caicos Islands to find out more.

This quaint West Indian fishing town located on the island of Nevis is part of a twin federation of islands that includes St. Kitts. Nevis is the much smaller southern island. 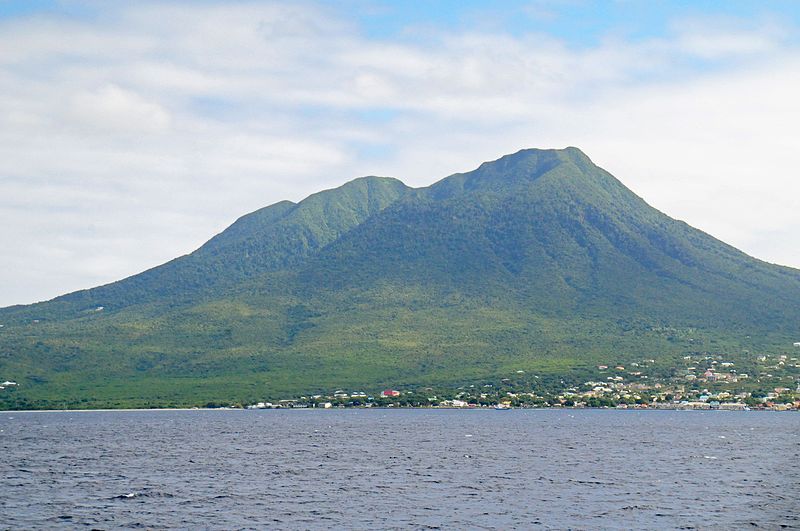 St Kitts and Nevis are defined by drastic volcanic peaks that stretch about 3,800 feet above sea level. A ring of clouds usually enshrouds Nevis Peak.

There is only one main road around Nevis that can be driven in about forty minutes. Hike to the “Source” and visit Sunshine’s Bar for a famous Killer rum drink.

There is a ferry over to St. Kitts that can take vehicles but if you are sailing the Caribbean Islands you won’t need it! If you’re lucky, you will catch one of the occasional horse races on the southern end of the island.

Part of the Dutch Caribbean, Curacao is way down south. Once part of the Netherlands Antilles, Curacao became an independent nation in 2012.

The main town, Willemstad is a colourful and very chic locale. It would not be out of place on mainland Europe. Rent a scooter and tour the island in a day and be sure to track down some pink flamingos in the wild. 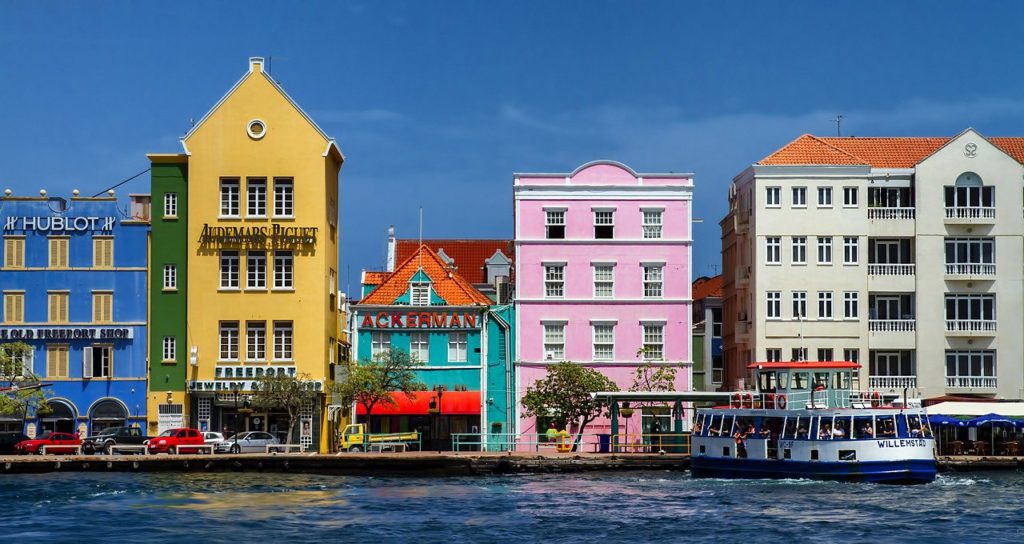 St. Martin / Sint Maarten is the smallest island in the world with dual sovereignty. The French control the northern part while the southern half is Dutch. Anse Marcel is also one of the best ports in the West Indies.

Along with Antigua, this is one of the busier ports in the region, so be sure to stock up on supplies. The island of Anguilla is about eight kilometres north and is a great day trip or overnight option.

If there is a north swell in the water, be sure to surf “Wilderness” which is located very close to this anchorage. Also there is good kitesurfing in St Martin. Check out the excellent shopping in Philipsburg.

Puerto Rico is truly a magnificent place. It has the size and population density to support a developed economy, though it is largely natural. There are gorgeous beaches, waterfalls, mountain ranges, reefs, lakes and more. A must visit when sailing the Caribbean Islands.

The western part of the island has great waves when there is a north swell and the surf vibe is low key. Old San Juan is an old fortified city that has tons of character. Check out the fortress and walk around the street vendors for some great local grub and craft shopping. Tons of nightlife.

Vibrantly tropical and with more rainforest than Costa Rica, Dominica will blow your mind with natural beauty. This place is truly a natural wonder located in the middle of the southern Caribbean.

The entire island is mountainous and undulating with very few flat plains. Much of the Pirates of the Caribbean 2 movie was filmed here. There are 365 rivers with tons of waterfalls, cliff jumps and over 100 kilometres of hiking trails.

Dominica does not have a single chain motel/hotel on the entire island. There are only a few options to fly here and the resident population is less than 80,000. So it is better to sail, which makes Portsmouth one of the best ports in the West Indies.

Be sure to scuba dive at Scott’s Head. There is a 850m (2,800 feet) drop off and insane visibility. The Emerald Pools is a beautiful waterfall. If you’re looking for a tattoo to commemorate your visit, ask around Roseau for a guy named Jose. Tell him Mark sent you. 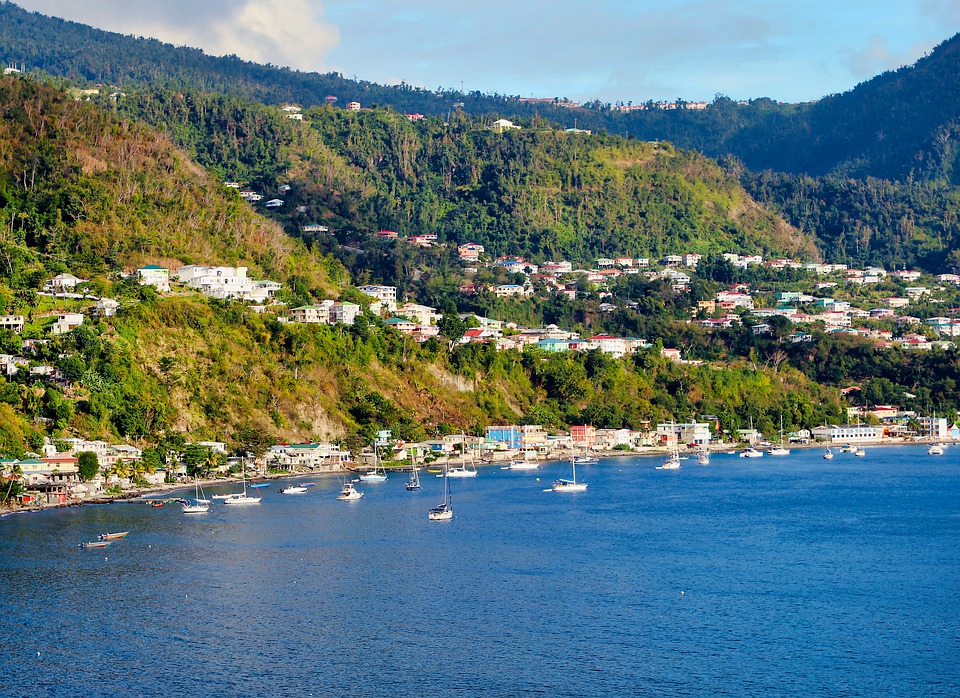 Imagine a twin-island federation with a population of less than 40,000 and without a single traffic light. St. Kitts is a gem in the Caribbean. With only one main tourist hotel, this place is not-yet overrun with tourists and a must when sailing the Caribbean Islands.

The St Kitts and Nevis locals know their livelihood is based on tourism. So they’re glad to see visitors. There is a prominent nightlife at a few select bars on Friday/Saturday nights, particularly if you find where the local medical and veterinary students are hanging out.

Be sure to hike the volcano and visit Brimstone Hill Fortress, which is a UNESCO World Heritage Site. Watch the sunset at Shipwreck Cove (South Friars Beach).

We hope you enjoyed this guide to the best ports in the West Indies. If you want to go sailing the Caribbean Islands check out our sailing holiday discounts as you could save a fortune. The Isle of Wight is a popular British beach holiday destination, located off the Hampshire coast in south of the UK. But I bet you didn't know that the best Isle of...

Rafting trip planning: How to pick the best rafting company

With so many firms out there telling you they are the best and the safest, just what should you be looking for when rafting trip planning? Expert rafter Hamish... Are you heading to Liverpool – or already in the area – and looking for something exciting to do? Well the best Merseyside adventure sports are as good as...