Skiplex promises endless skiing. But, is it the real deal?

It was the first time I had actually seen myself ski but I didn’t look as good as I’d imagined, despite having notched up almost endless skiing holidays during my ten years on the slopes. 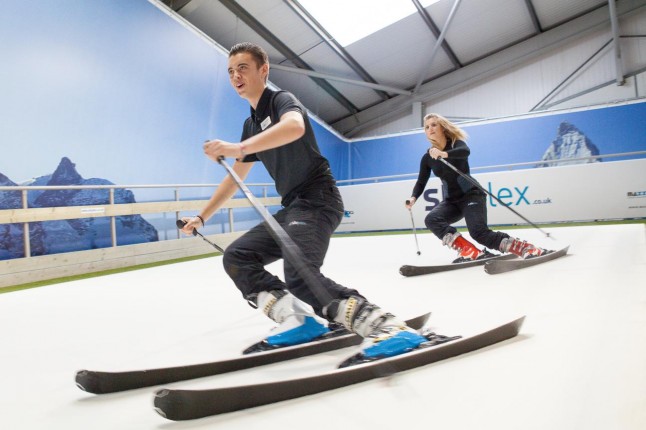 Watching myself sliding and flexing in front of the huge mirror, I could see that my upper body was moving around far too much, and that I was leaning over my uphill ski as I travelled across the ‘piste’, rather than keeping my core upright and balanced.

Before long, these glitches in my technique unbalanced my skis and I fell onto the white carpet with a clatter of metal.

My Skiplex experience had begun!

“Ok?” my instructor James asked, flicking off the switch.

“Yep, fine” I smiled, ignoring my throbbing shin, and I jumped up to start again.

Housing two giant treadmills, each roughly the size of a squash court floor, Reading Skiplex opened to the public at the end of last year.

Covered in white, carpet-like fibres, which can be hosed with water to add more grip, the remote controlled slopes are easily adjusted to alter the piste angle, and the speed of the moving carpet can be increased or decreased, according the ability of each skier.

Offering endless skiing on their never ending slope, with no need for ski lifts and no waiting in-line for other skiers. Meaning you can rack up some serious mileage on these slopes, linking turn after turn until you’re tired out.

But getting used to the feeling of the ground moving beneath your feet takes a while.

To start with, I felt like I was learning to ski all over again, with my skis locked in a permanent snow plough position. After a bit more instruction from James, I was feeling more confident and was starting to get a feel for gliding across the piste; but I couldn’t master a parallel turn, no matter how hard I tried.

Next up was my partner Tom who, despite having never clicked boots into bindings before, is one of those annoying people who’s pretty good at everything!

After using the remote control to set the piste at a slightly lower angle and slower pace, James started Tom off holding onto the bar, so he could get used to the feeling of the carpet sliding backwards beneath his skis.

With James standing on solid ground in front of the slope, never more than a few metres away from Tom, he could constantly coach him, feeding him tips and hints every few minutes to tune his technique.

Balance mastered, Tom was taught how to use the snow plough position to stop and control his speed, before learning how to steer and turn. After little more than ten minutes, he was sliding effortlessly across the slope, wondering what all the fuss was about. And the most annoying thing? He didn’t fall once – at one point, he even did that annoying thing of glancing at his watch as he skied. 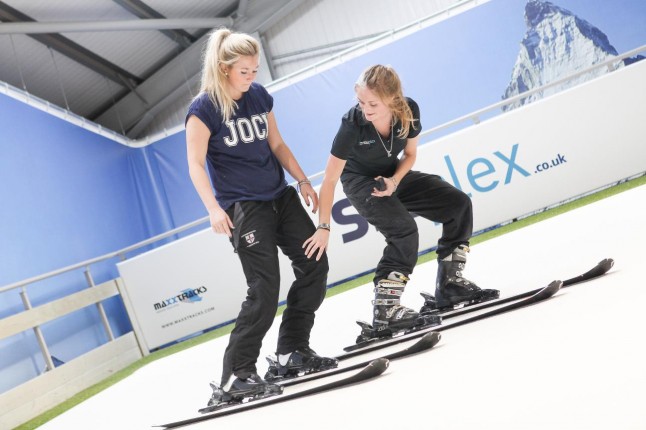 Having already spent several seasons working as a ski instructor in Meribel, James told me that the learning curve was much quicker here than on real snow.

“You can learn around eight times faster on this stuff,” he said. “You’ve got your instructor standing right next to you, and you can have a small group or one-to-one session every time you come,” he explained.

Without breaking your flow to catch a lift, learners can build up vital muscle memory, repeating the same actions again and again until they’ve mastered the basics.

I could really see how a few sessions at Skiplex would be great for building confidence before heading off on an expensive ski holiday.

James admitted that Tom had been a particularly fast learner. He also added that more advanced skiers, who are accustomed to the more forgiving nature of real snow, often find the machine harder at first, as it requires a real honing of technique – anything but a perfect stance and you start to lose stability; although I’m not sure if he was just saying that to make me feel better.

You don’t need any special equipment to ski here. Just turn up in your jeans and t-shirt, and you’re ready to go. Skis, boots and instruction are all included in the price, and you can snowboard here too if you let Skiplex know in advance.

And there’s lots more going on, aside from learning to ski or perfecting your technique. Ski racers can come to here to train on Wednesday evenings, with cones placed on the slope to simulate a slalom course.

There are also dedicated singles nights and disabled skiers can receive specialist training. Or, to get yourself in peak condition before a skiing holiday, you could sign up to ‘Ski Fit’ sessions, which aim to work on lower body and abdominal strength, as well as overall ski fitness.

Never-ending ski slopes may be a fairly new concept in the UK (the first Skiplex slope was installed in Chiswick in 2011) but they’re already well-established in mainland Europe, where there are more than 100 centres.

And if you’ve got a spare £150,000 in the bank, you could even get your own Skiplex slope installed at home.

Even after just one session at Skiplex, I felt that my technique had improved and, hitting the real stuff a week later, I found myself thinking more about stabilising my core and reducing the amount of swing in my upper body.

A few sessions at Skiplex each year could really help fine tune my skiing but, if nothing else, I’m determined to go back just to prove to Tom that I can do it without falling on my arse! In this guide to Egypt kitesurf holidays we look at the best Egyptian kite spots and other useful information for any visitor. From it's rich historical and cultural... Queenstown is the New Zealand adventure capital. And given the country’s reputation for action sports and crazy activities, this makes the best extreme experiences... Top ski jacket tips: How to buy a coat for skiing or snowboarding

In this article we discuss how to buy a coat for skiing or snowboarding. If you are serious about winter sports a jacket purchase is more complicated than picking...